A Surprise on your wedding day is a fun way to make your day extra special. The many surprises we have encountered include surprise renewals of vows, surprise weddings for the bride, surprise wedding for the groom, surprise audiences and sometimes surprises for me and the Whim Team! Over the past 16 years, we have shared many “Fond Memories” with our couples In the next few posts of our Happily Ever Afters, you’ll witness a sampling of these blessings. We hope they will inspire you. 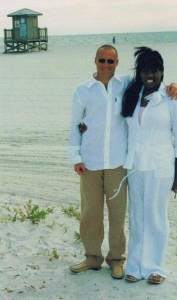 Our First Surprise story is about a British couple (pictured above) who were visiting the groom’s parent’s vacation home. She thought she was in for just another ordinary holiday with his parents. One night they told the bride they were taking her to dinner. Unbeknownst to her, the groom and his parents had something additional planned.  Their first stop for the evening was the Clearwater marriage license office. After they got their marriage license, they met me out at Sand Key Beach Park where I was waiting for them. I was relieved that the bride had said, “Yes!”  The one thought she shared was “I wish I had worn better shoes!” 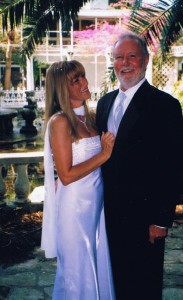 For the Next Surprise couple, the bride had to attend a business related gala at the Kaypok Tree Event Center in Clearwater.  The groom had lived at the beach most of his life and said he never wore anything except shorts and a shirt.  Since he had to get dressed up for the gala, he decided to make it worth his while and get married too.  Just the three of us met before anyone else had arrived.  We stayed outside and went to the back of the building to find a private spot to have their ceremony.  The groom, who  was expecting a casual experience, was surprised when tears started to flow from his eyes as he said “I didn’t expect to be this emotional.”  That’s what love can do!

This Surprise couple had been together for more than 10 years, they planned to tie the knot as a surprise for their blended family by having their wedding during everyone’s annual vacation at  The Bon Aire Resort in St Pete Beach.  After telling me he wanted a low-key,  small wedding with no attention, this shy groom scheduled the wedding for 10:00 a.m.  The night before the wedding, they met a St Pete Times photo journalist at the tiki bar.  When I met the groom at the beach, nearly everyone from the resort was on the balconies and decks, awaiting the ceremony. The Times journalist showed up too!  This once small wedding had turned into quite a display drove the groom  to  open the champagne before the wedding. 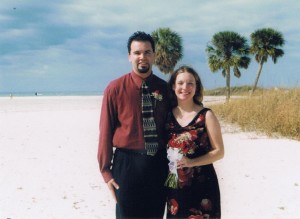 Our last story was more of a surprise for me than a surprise for them. On their wedding day, this cute couple met me at the Satellite Motel,  Treasure Island.  I expected the wedding to consist of me and just the 2 of them,  since no one from their family could make it to Florida.  As we crossed the street en route to a  special spot on the beach, I was surprised to see about 15 people following us .   When I pointed out the crowd, they explained who these wedding crashers were.  Guests at the motel found out that the couple had traveled alone from Indiana for the wedding.  Seeing their disappointment that family could not attend, the guests invited themselves to the wedding.  The friendly couple said they  were grateful their new found friends could be there.

As you can see, surprises come in many different forms.  It takes planning, communication and timing to make the perfect surprise! I hope I have inspired you to create your own wedding surprises. I look forward to bringing you more “Fond Memories” in the coming weeks. As my dad used to say: “Keep Smiling, Its important,”

Not sure where to start?

Contact Us today to learn more & save your wedding date!

Dates are available on a first come first served basis.

Our Wedding Concierge experts are your pen pals & phone friends that help you plan a simple, affordable beach wedding.